How to use technology to do social good – A story about Code4Romania
September 30, 2019 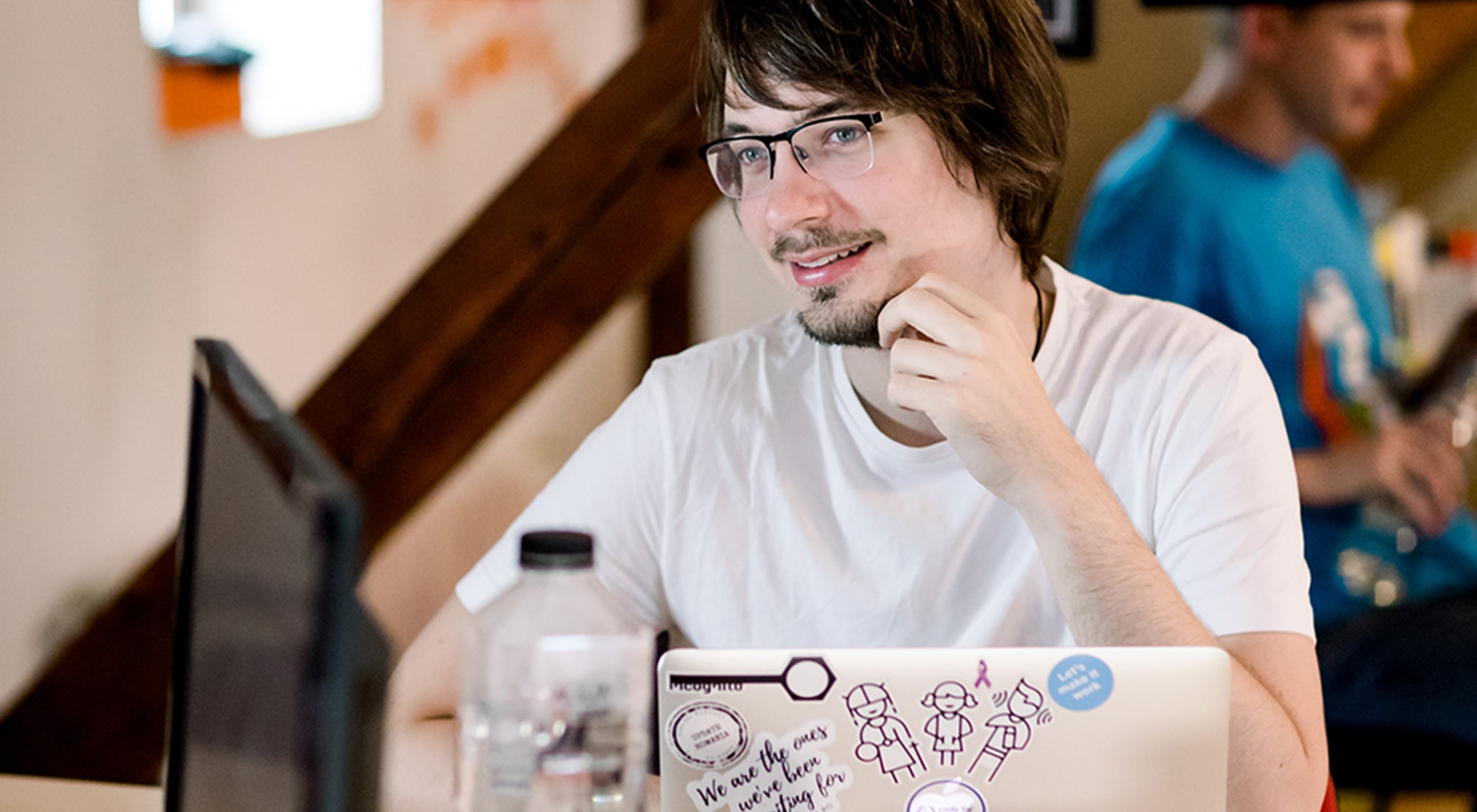 As the poet, Bob Dylan once sang “ Everything is broken”. And so, we must not be romantics. But the story of sorrow is not the whole story of life either. There is also wonder and glory, joy and meaning in the vocations that are ours. – Steven Garber

All day, every day, we are surrounded by both the wounds and the wonders of this country we call our “home”, if only we have eyes to see. And seeing is where vocation begins.

This post is not your typical “Instagram caption” because this is a moment to be thoughtful, a time to dig beneath the blankness, beneath the indifference, an open invitation to name both the beauty and the brokenness around us. So make yourself a cup of tea or coffee and read on.

There’s this person I met a few days ago and you know what? He’s changing the world. He’s not a politician. He’s not running for office, he doesn’t come from a wealthy influential family – although his LinkedIn profile can be quite intimidating – but he is, without a doubt changing Romania as we know it.
It’s not a secret for any of us that in the 21st century, technology is impacting the world in profound ways. Access to data and understanding how to interpret and transform it into information that people can actually digest is crucial to solving many of the social problems our country has. It is data collected by technology that drives and shapes the way stories are being told. And it is access to mobile devices in particular that is providing a voice to citizens to the degree that the fight for civil rights is now happening on the digital frontier.

That’s how the idea of Code for Romania – one of the strongest movements and NGOs in Romania came to a person who had nothing to do with technology.

Bogdan Ivănel grew up in a civically oriented family and spent his childhood summers at Băile Olănești. His first memories are of the Revolution and being on top of his father’s shoulders during the Romanian Mineriad* so he was in touch with what was happening in Romania even from an early age.

He was 18 when following his dad’s advice, he left to study Human Law at Utrecht University in the Netherlands. Today, after a decade of working in academia, doing research in war/conflict zones or working for international tribunals, his job states: Co-founder & Managing Director of Code for Romania.

There is a tragic story behind Bogdan’s decision to form Romania’s largest civic tech community and its name is Colectiv.

The event in question was a disastrous fire that took the life of 64 people. In the investigation that followed, it was discovered that club management had bribed officials for the club’s required safety permits.

The accident put a spotlight on long festering corruption issues at all levels of government. Protests followed, and an estimated 30,000 Romanians took to the streets, demanding the prime minister to step down.

It was in this context that Bogdan saw an opportunity to channel all that energy into something really useful.

“I started mapping Romanian civil society to try to understand it and I noticed two things: One, a lot of organizations were trying to open data and push the government to be more transparent and two, a big bulk of the population was complaining that people either don’t vote or if they do vote, its in an uninformed manner.”

The vision that followed was simple: make use of technology to solve social problems in Romania and make “home” a better place to live in.

To facilitate how the state interacts with its citizens, bringing together different communities that do not typically cross-over – technology, nonprofit and government, was a daring idea but a much needed one for sure.

“There’s a lot of stuff that breaks my heart. In Romania everybody knows we do have a lot of problems. We have where to choose from and where to intervene but we can’t do everything overnight. […] Code for Romania is just one venue for people to use what they know – writing code or doing design or doing communications in order to solve a social issue. My biggest pride is that we were able to build such a community, such an organization and that it’s functional.”

Three years later, Code for Romania has recruited a staggering number of volunteers – over 800, achieved wide recognition in the local press, moved into an office in central Bucharest, hired around 8 people and produced award-winning digital tools.

“ We thought it was going to be something we do on our weekends. It totally blew out of proportions very fast. In 2 weeks we were 50 and the moment we launched, more than 300 applications came in for volunteering; it was a huge wave we had to manage.”

Some of the products Code for Romania launched are Monitorizare Vot, Redirecționează and Incognito.

Monitorizare Vot was a pen to paper affair. People were sent into the polling stations and they were filling in forms all through the day about what they were witnessing there. It took about one year after the report came in to really get to look into all the data. You can imagine that a report received after one year from the elections won’t make any difference.

Right now, observers can send information in real time in a very secure way and the organizations in charge can act right away on that data. So this was a huge game changer. At the last elections Code for Romania had ever 1000 volunteers that gave 24 hours of their time to observe and report what was going on the polling stations. This was an unprecedented thing in Romania and one of the democracy’s biggest wins in our country in the last 10 years.

Redirecționează is an amazing project because it’s technically very simple. It’s easy to understand and it solves a big issue: the fact that very few NGOs were able to gather the forms for redirecting 2% of the income tax. Basically Code for Romania digitize the whole process and now there are over 1000 NGOs using this form.

Incognito comes to solve the problem of IT security knowledge in Romanian journalism. It’s a system through which whistle blowers can contact journalists in the safest way possible. The app makes everything they sent anonymous and encrypted in the hopes that they will feel encouraged to speak out more.

But Code for Romania’s biggest win remains by far the huge community they managed to gather around this one goal — a better place to live in, a place our children would actually choose to stay.

“ Maybe they have to be crazy. How else can you stare at an empty canvas and see a work of art? … While some see them as the crazy ones, we see genius. Because the people who are crazy enough to think they can change the world, are the ones who do.”

For Bogdan doing good is attacking the cause and not the system. Doing good can be estimated even if the impact is 3 steps ahead from what he does. He knows exactly what their projects solve and this is part of why he loves doing what he does at Code for Romania because with technology everything is quantifiable.

His advice for someone wanting to do good as well?

“Be a bit strategic about it, see what others are already doing. Don’t try to overlap. Often times we have this problem of a strong sense of ownership. We want to do things by ourselves. If you see that somebody is already doing something amazing, go and help that person, you don’t need to start your own thing.

If you however see that there’s a gap somewhere, then start your own thing. Have a lot of energy and don’t make compromises because every compromise you make as an NGO right now, in a field that is not stable, fragilizes you even more. Go to the core because if you only solve the symptoms, then more symptoms will come out tomorrow and nothing will change in the end.”

Change. There are times when we see the magnitude of this word and then there are times when it just passes us by. It takes courage to think different. There are words only we can say, comfort only we can offer, solutions only we can think of and communities only we can change. It’s quiet work, invisible work, light and simple, never easy. Honor the courage it takes to start and know that sometimes it looks like simply showing up. Find your brave YES. Fight for your strong NO. Tell your stories and as you live them, extend grace to those around you to do the same.

*The Mineriads (Mineriadă) were a series of violent demonstrations by Jiu Valley miners in Bucharest during the 1990s, particularly 1990–91. The term “Mineriad” alone is mostly used to refer to the most violent protest, which occurred June 13-15, 1990. During the 1990s, the Jiu Valley miners played a visible role in Romanian politics, and their protests reflected inter-political and societal struggles in post-revolution Romania; source: https://en.wikipedia.org/wiki/Mineriad

Find out more or adjust your settings.

This website uses cookies so that we can provide you with the best user experience possible. Cookie information is stored in your browser and performs functions such as recognising you when you return to our website and helping our team to understand which sections of the website you find most interesting and useful.

Strictly Necessary Cookie should be enabled at all times so that we can save your preferences for cookie settings.

If you disable this cookie, we will not be able to save your preferences. This means that every time you visit this website you will need to enable or disable cookies again.